Here we all stand about a decade later from September 15, 2008, when Lehman Brothers filed for Chapter 11 bankruptcy protection and when the tremors of the subprime crisis continued to shake the grounds where we built our homes, our pensions, and our dreams. Collapses, rescue plans, and a wave of socializing the costs of failures of several financial institutions; can describe in a nutshell the economic policies that have followed since. Bernard Lunn started the week with Do you remember where you were on 15 September 2008? and inspired me to reflect back too.

On Sep 15, 2008 I was living in Montreal and McGill University had asked me to teach Real Estate Finance with a one month notice (a part-time practitioner engagement). No textbook could reflect the unfolding reality. Freddie Mac, Fannie Mae, Ginnie Mae, the three GSEs (Government-sponsored agencies) were going to be restructured and it was exciting to understand the complexity of the evil mortgage-backed structures rather than the outdated textbooks.

Outside the university, everybody was affected, from end consumers, homeowners, corporates and the globalized economic activity whose Gas is mainly credit. The trusted institutions – the Gas stations – through which Gas is distributed to the people and to businesses of all sizes, have since created since a bottleneck that continues to choke the global economy. Over this decade, 2008-2018, we have seen (in retrospect) how this Gas station monopoly was affected by Central Bank policies that on the one hand, increased their inventories of Gas (more money has been available for banks to borrow from the Central Banks) but at the same time, new Regulations (changing the rules of the game for banks without consulting them) has led to these Gas stations shrinking their franchise network, reducing their willingness to provide service to their customers, and overcharging them/us.

Outside the university, everybody was affected, from end consumers, homeowners, corporates and the globalized economic activity whose Gas is mainly credit.

These licensed Gas stations who are led to dis-serve their clients but still hold a monopoly (granted by central governments) have led to movements like Occupy Wall Street and to lots of innovations around financial services – Fintech. From peer-to-peer lending, crowdfunding, to robo-advisors, and freemium PFM apps; and to Bitcoin. Let’s not forget that the genesis block of Bitcoin had hardcoded the title of London Times newspaper of Jan 3, 2009

“Chancellor on brink of second bailout for banks”

The hash of this genesis block is

There is a strong belief that this is no coincidence but a clear message of the failure of the financial monetary system which is designed and managed by states. A credit system based on the fractional reserve system and thus, creating Gas (Credit) out of thin air. A Credit system that can and will change the rules of Gas (Credit) creation and in the name of saving the financial system, it will pass on the costs of these bailouts onto taxpayers. Andreas Antonopoulos keeps reminding his audiences around the world, that a decentralized p2p network like Bitcoin is incompatible with fractional reserve banking and that Bitcoin is born out of the failure the latter system; Hello from Argentina (that is my addition and not Aantonop’s).

As traditional Fintech continues to make inroads – albeit by partnering with the licensed Gas stations or obtaining such licenses themselves – and as decentralized protocols, like Bitcoin, or God protocols (as introduced by Nick Szabo before even the internet was mainstream) are being tested left and right (still in early stages); what has happened to the branded Gas Stations over this decade and what has actually been accomplished regarding the Big Black Swan that haunts us since 2008  – The “Too Big to Fail” Black Swan? 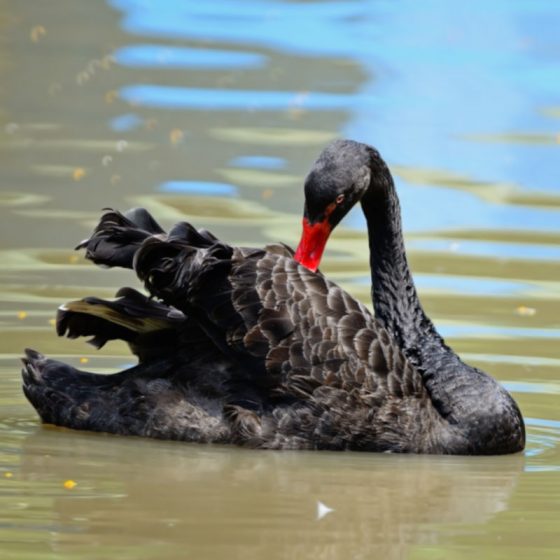 Congratulations to the Central Banking system for reducing the size of the Big Wall Street houses – the Sell Side. The Wall Street Journal reported this week that their assets have shrunk 6% over this past decade.

Congratulations for kicking out from Wall Street all CEOs from the previous era. Jamie Dimon maybe one of the few, still standing strong.

Congratulations for dethroning Wall Street from being the Mortgage Kings.

#AndTheIronyIs that we need to make sure that we “Feed the Fink”, we network with Jamie Dimon and all those that were “cleaned up”, and we get our mortgage from our phone.

Blackrock, Vanguard, State Street, and Fidelity, have doubled their assets since 2009! They manage close to $17trillion and Vanguard brought $1billion a day of new money last year[1]. I call this the mushrooming of the Buy-side. Let’s all make sure that we “Feed the Fink” and we know from which direction the Black Swan may appear from.

Non-bank lenders have become larger than Citigroup or Bank of America lending businesses. The WSJ journal reports[2] that US non-bank mortgage originators have grown from 9% to 52% over this past decade. Let’s all shop for homes in a new way (not from a bank but a kiosk or our favorite social app). And let’s make sure we know from which direction the Black Swan may appear from.

Markets are still plagued from Black Swans that belong to the bread of “concentration of power and illiquidity risks”. From miners accumulating power of digital assets to the Buy Asset accumulating i-shares and passive AUM.

Markets overall continue to shift resources rather than reinvented themselves. #WhereMortgages, #WherePeople but same financial instruments designed and sold by the same people in different packaging and at different POS. Banks have been forced to downsize and be risk-averse and the Sell Side has taken over along with Fintech startups.

#WhereGas – #WhereCredit is where we can look for true innovation. Too early to see a newspaper title like:

This post has elements of cynicism mixed with insights. Readers are left to distinguish the ironies from the insights.

[1] How Banks lost the Battle for power on Wall Street, WSJ Sep 7

Robo-advisors: What are the fact and figures telling us?

Is Sustainability your driver? Stop Borrowing from the Future.