In October the US market witnessed the Robinhood effect. Schwab slashed its stock commissions to zero, which in turn forced TD Ameritrade, E-trade, Interactive Brokers, Ally Invest, and Fidelity to follow suit over the next few days. Schwab called this the zero-commission brokerage war, on CNN. A week or two later, after Bank of America reported better than expected earnings, they also announced the expansion of their online zero-commission program through the Merrill Edge Self-Directed program.

One private Fintech, Robinhood, has managed to drag along all these publicly traded companies. Some of them are pure brokerage businesses and others are much broader financial services providers. They are all however public and disclose their business practices and their revenue sources. Robinhood, despite being a native Fintech, has been relatively opaque about the way it makes money and its revenues.

Now that one private company and half a dozen publicly traded providers have all zero stock commissions, let’s look at how things are working behind the scenes. How are they making money from the happy clients that trade stocks for free? The happiest ones being those that actively trade, the high turnover DIY individuals or smaller money managers. There are only two ways to make money from such `users`: (a) from the interest rate differential on the cash balances they hold with you, (b) interest on margin balances © from payment on the order flow data that is sold to HFT firms, (d) by charging a subscription fee for the service.

Robinhood is the only one that is offering a subscription service called `Robinhood Gold` (1st month free and then $5 a month) to use premium services like professional research, real-time market data, etc.

Robinhood has just this month figured out how to pay interest to its users through sweep accounts, after making a regulatory goof last December with the launch of a cash account. They are now offering 2.05 % interest. Which seems considerably higher than what the public companies are offering. Feb 2019 figures show that IB ranked on the top with up to 1.9%, Schwab and TD Ameritrade were around 70bps and E-trade around 40bps. [1]

Where Robinhood gets shady and is not in alignment with Digital anti-feudalism that Fintechs supposedly represent, is in selling order flow data to HFT players, like Citadel and Virtu Financial.

Alphacution has researched this area in detail and shows the latest figures of order routing revenues (2018) in equity markets. Robinhood does not need to disclose all its revenue components but as a broker dealer it has to disclose some financial data. Alphacution uses what was disclosed to estimate Robinhood`s order flow estimate. There is a surprising jump in Robinhood`s 2018 revenues from selling order flow — over 200%. This shows that Robinhood has automated this process and that customers may not be getting the Best Execution. 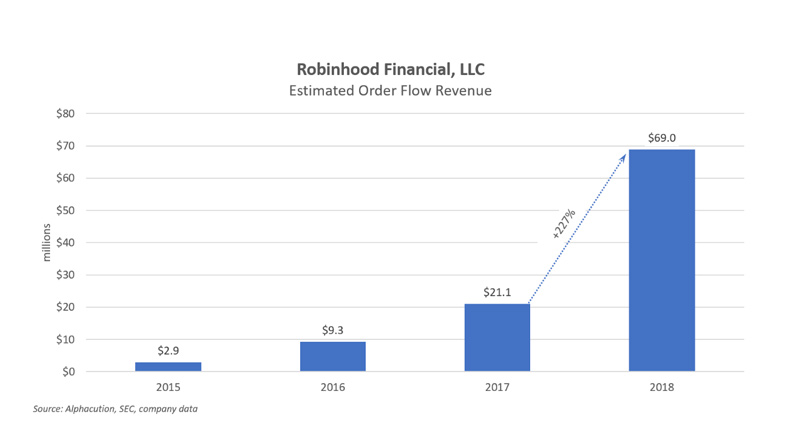 Last October Bloomberg reported, that Robinhood earned more than 40% of its revenue in early 2018 from selling its customers’ orders to high-frequency trading firms, or market makers. 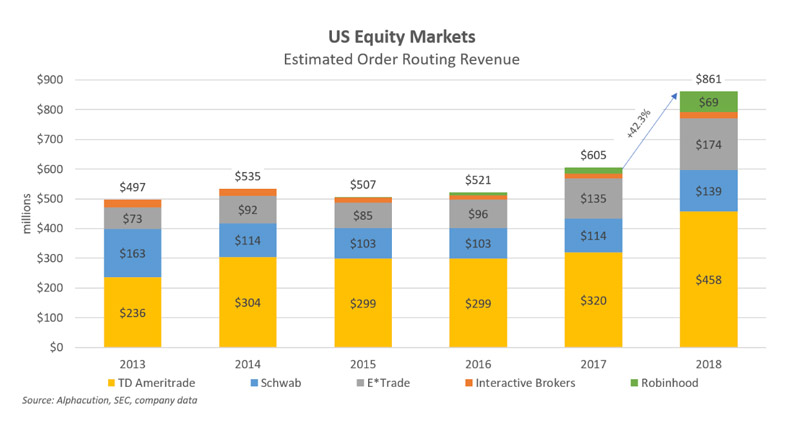 The only company that is not participating in this business is Fidelity. As Kathleen Murphy told CNBC, they are the only ones that do not take payments for stock or ETF trade flow. At least with Fidelity, there is no inherent conflict of interest with regards to best execution.

Digitization has grown clearly benefited customers in terms of better user experience and lower fees. Robinhood has pushed the sector to offer zero stock commissions. This happened in late 2019, while 2018 seems to be the year of substantial growth in another business:

The Business of buying and selling equity order flow data exploded in 2018.
Robinhood is leading this explosion.

This market is not mainly Citadel and Virtu Financial. Alphacution shows that they handled only 15% of the flows and the sector has grown since 2013 over 70%.

Thank you very much Robinhood.

These are the new intermediaries between the end customer and those in the opaque order routing business.

Who will disintermediate this space and bring those order routing commissions to zero and full transparency so that the best execution is built-in? Are we too far away from such a disruption?

Who will offer asset managers a way to pay direct for order flow and get best execution? Will this be the reason to tokenize publicly traded stocks and use smart contracts to handle order flow?

Will Robo advisors take control of the ETF market?