Customers — Investors should be extremely happy with all these developments. However, there is one major concern whose ugly head may not be noticeable. An elephant is in the room, here too. Its name is `The Big Three`. The concentration power of three US-based companies, Blackrock, Vanguard, and State Street, and its ramifications has gone largely unnoticed. 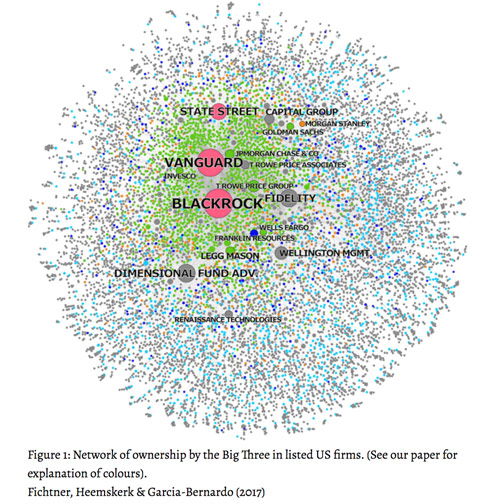 The growth of low-cost investing, the disruption of the brokerage business model and the digitalization of the investment process, has created this excessive concentration in the Big Three asset managers.

Blackrock, Vanguard, and State Street have corporate control over 40% of the US stock market! These giant index fund businesses have too much shareholder voting power. That is one of the reasons that it matters a lot what the Fink says about climate change and ESG. In this case, we like his commitment but let’s be aware of this Corporate Governance entity in the room

The Harvard Law school forum on Corporate Governance is also researching this theme. In their paper The Specter of the Giant Three they look closely into this issue and estimate that the Big Three could well cast as much as 40% of the votes in S&P 500 companies within two decades.

Even though, the Big Three own less shares than 40%, their impact is amplified because they exercise their voting power 100%, whereas smaller asset managers do not.

The Big Three currently collectively hold an average stake of more than 20% of S&P 500 companies and each one of them (BlackRock and Vanguard) now hold positions of 5% or more of the shares of almost all of the companies in the S&P 500.

“Problem of Twelve” — the likelihood that in the near future roughly twelve individuals will have practical power over the majority of U.S. public companies.

In just these last two years, the problem has become more acute.

If we continue to focus on democratization (access, low cost) of financial products and services with no innovation in corporate governance, we will end up pretty much in the same corner as we have with the Big Tech companies.

Celebrating the WEF 50th anniversary with 50 bytes from Davos 2020