In November 2017[1], I spoke to Nadav Hollander in California, the founder of Dharma.io, who had just “graduated” from Y-combinator. At the time, he described his vision to create on the blockchain a tokenized marketplace for loans. In February 2018, the Dharma open source protocol went into alpha testing.

Developers could easily use the Dharma libraries to:

Dharma didn’t ICO because Hollander believed that token models were very immature right now. Hollander says “I’d rather build a community of constituent users and, only if and when it makes sense, issue a protocol token.” For now, Dharma open source protocol has no native token, but each loan that is created is a token itself

No counterparty risk (smart contract risk, since assets are held there).
Instantly, at very low cost.
Lower borrowing rates than centralized exchanges.
Compatible with all wallets.

Dharma is in the same league as Maker – be your own bank or Defi[2] – that allow us to borrow against our Hodlings. Dharma involves no DAI and accommodates several cryptocurrencies beyond ETH. They are even looking to add WBTC soon which went live on Ethereum just last week.

WBTC – Wrapped Bitcoin is an ethereum-based token that is backed one-to-one by a regular bitcoin BTC.

It is already listed on several DEXs[3] including Radar Relay, Kyber Network, and AirSwap.

Dharma is changing the crypto lending space with their Lever offering that eliminates counterparty risk and replaces it with smart contract risk. 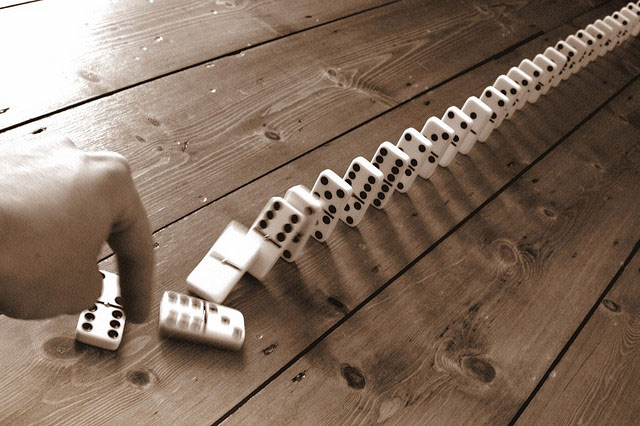 The Dharma Lever is one way to mitigate systemic crisis due to the domino effect of counterparty failures.

[1] I introduced Dharma in my Feb 2018 post Bonds & loans on the Blockchainalong with Tzero and Nivaura.

[3] Read more about DEXs in `Are Decentralized Exchanges part oft he bottom up decentralized monetary policy?`

Leave a Reply Cancel Reply
You might also like
One of the following
Can Facebook pull off a 60% attack on the LIBRA network?
A world of #WhenBinance & #WhenSIX

Are robo-advisors about Low-cost products or `Passive beats Active`?