“At the time of its Series E fundraise in May 2018, shares of Circle were worth $16.23 a piece at a valuation of $3.01 billion, but in January 2019 shares are available to be purchased at just $3.80. To be sure, it is not clear how many shares are being offered at this new price, nor is it clear if any shares have exchanged on the platform at this price. This share price implies a $705M valuation.” excerpt from Prop Shares are Hard to Sell: Shares of Crypto exchange Circle are being offered at a massive discount.

The Austrian school of economics view is that

Stock Exchanges are the fastest and most efficient data-processing large scale system that we humans have designed so far.

Stock exchanges need roughly 15minutes of trade to determine the effect of a piece of news – political, scientific, ecological, societal etc – on the prices of shares.

Whether this will change with DLT technology and when, is up in the air. For now, we have old and powerful institutions running these data-processing systems and it wont be easy to steal their Cheese.
The Frankfurt Stock Exchange is over 400 yrs old with a market cap putting it in the 10th position globally. The London Stock Exchange (LSE) and the New York Stock Exchnage (NYSE) are bother over 200yrs old and are in the 3rd and 1st respectively by market cap. Just a few blocks away from the front runner, there is NASDAQ only 45yrs old and with a 2nd ranking in market cap.

The 29yr old Australian Securities Xchange (ASX) ranking 14th in size, is actually the bravest in that they were the first to explore DLT technology for their settlement and post trade activities. Digital Asset has been their partner, with whom they have been designing a replacement of their Clearing system CHESS since 2015, which they actually own (not the case for other stock exchanges). The full launch has been pushed out again from 2020 to 2021.
The architecture of this system maintains the messaging-based interaction with its participants and does not require them to have to run a node on the network in order to participate.

“We are often told by many, including other market infrastructures, ‘You’re so brave that you’re going first, you’re using DLT’ — we actually genuinely consider it brave to embark upon a large transformation program and not adopt this technology,” said Cliff Richards ASX`s executive general manager of Equity Post-Trade Services. 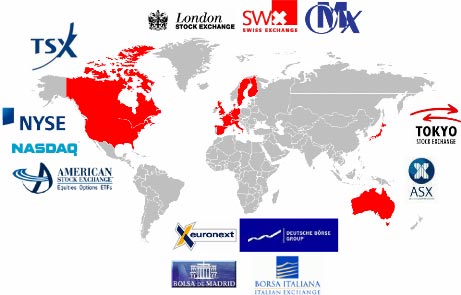 NASDAQ is the most active stock exchange by being involved in several different DLT initiatives that are however, recent.  In Spring 2016, in a post about Fintech in action on Western stock exchanges, I had mentioned Linq, a private blockchain company focused on private securities issuance. Linq allowed unlisted private companies to represent their share ownership digitally and securely. Later, Linq and Chain, a blockchain services provider, used DLT to register digitally ownership of private shares.

In May 2017, Nasdaq partnered with CitiConnect for Blockchain and took Linq to the next level. They went through a seamless end-to-end transactional process for private company securities.  Payment and reconciliation magic via DLT.

In October 2018, NASDAq also partnered with the Azure blockchain service of Microsoft. The aim is to integrate it in order to improve buyer-seller matching, management of delivery and payment. The key advantage they present is that this deployment will allow for interoperability with customers using various blockchains.

What really caught my attention is the Nasdaq`s use of DLT technology in their newswire services. They are starting to use smart contracts for time-sensitive data like corporate announcements, press releases, regulatory filings, etc and the associated valuable meta-data. Nasdaq seems to have filed for a patent around this  – Nasdaq Gets Patent for Blockchain Newswire to Solve Gaps in Audit Trail Gaps and Errors!

For me this latest use case, can be big.

Distributing meta-data through smart contracts and giving access to it on a pay-as-you-go way, will be a huge business for stock exchanges

and Nasdaq can dominate in this.

The leading Artisans of today, from Davos, WEF2019

The tech rating agency with no conflicts of interest – Early Metrics