SPAC Research reports that US companies have raised more than $40 billion through SPAC IPOs so far in 2020. Barron`s reported that in 2019, one in four IPOs was a SPAC, and they raised a total of $13.6 billion for 59 SPACs.

As of the 3rd week of September, there were over 100 SPAC offerings completed in the US through which $40+billion has been raised. This compares to triple the amount of dollars raised in 2018 and close to double the number of SPACs launched. The activity reported from SPAC research shows that there are several SPACs seeking targets and others that have found the private companies that they want to allocate their funds.

July was the month with the Mega-SPAC filing of $4billion. Bill Ackman’s Pershing Square Capital Management went public with a SPAC focused on the tech sector. The shares PSTH-UN launched at $20 and as of Friday`s Sep 18th close, they are $22.13. Let’s see if some Fintech ends up in this SPAC.

SPACs offer a faster way to market, avoiding several costs, and the undesirable price action following most IPOs and the prohibition to release financial information.

SPACs are a fast way for investors to access private companies.

It Has Been a Huge Week for SPAC IPOs. Here’s What You Missed. (Barron`s)

In July, there was also a Fintech focused SPAC IPO on NYSE worth $350million.

A blank-check company that will focus on businesses in the Fintech or asset and wealth management sectors, with an enterprise value between $750 million to $3 billion. FUSE.U launched at $10 and is now at $10.20.

Another fintech SPAC July noteworthy deal, is the Diginex reverse merger with SPAC 8i Enterprises Acquisition Corp ($JFK listing on Nasdaq). Diginex is a Hong Kong-based crypto and blockchain solutions tech firm. $JFK is a SPAC that raised $76+million in May 2019 and now is facilitating the US listing of HK based Diginex. Keep in mind that Diginex already operates its own crypto exchange called EQUOS.io in Singapore under a payments restricted license. It also operates an over-the-counter (OTC) crypto trading desk, Diginex Access, and a “hot and cold” custodian, Digivault.

The acronym SPAC is “Special purpose acquisition companies”. A SPAC goes public and raises money that are kept in a trust. The mandate of the SPAC is to go out hunting to acquire a private operating company (or companies) in a specific sector. It used to be a tech unicorn hunt in the old days.

Marc Rubinstein reports in his latest `SPAC the new black` that Bill Ackman`s latest SPAC structure has introduced novel terms. The basic terms of a SPAC (source) include investors receiving common stock and detachable warrants. The devil is always in the details of course, so the warrant details play a large role (whether they can be exercised before or after the acquisition). Kenneth Squire explains the details of the new $4billion SPAC structure in detail here. The main point is that Pershing Square, the SPAC sponsor, for the first time is not receiving any founders shares. So, Pershing Square will receive compensation only after SPAC shareholders receive a 20% return. In the usual SPAC structure, it is reverse, Pershing Square gets paid first and then the shareholders.

Bill Ackman and Tontine Holdings rewrite the terms for SPACs

Back in October 2017, I wrote about Fintech SPACs as Social Capital Hedosophia Holdings Corp. listed on NYSE in September IPOA.U) and raised $600million. In late 2019 IPOA.U merged with Virgin Galactic (SPCE), in October 2019 focused on human spaceflight.

The second Social Capital Hedosophia fund targeting US tech companies (IPOB.U) was launched this year at the end of April and raised $360million. This was just a week apart from the third fund from Chama IPOC.U.

IPOB.U launched at $10. It just announced a deal to merge with Opendoor, the fintech focused on real estate. Based on the terms announced, the SPAC will inject $414million into OpenDoor and another $600million will come from a group of investors that include major funds (e.g. Blackrock) and Chamath Palihapitiya himself.

The IPOB.U SPAC price has jumped as high as $19 and is settling around $16, as the deal is not finalized.

Back in 2017, I also mentioned the then only pure Fintech SPACs listed on Nasdaq, FNTC and FNTEU. They were both was managed by The Bancorp (TBBK).

FNTC listed on Feb 2015 and raised $100mil and one year later acquired CardConnect, a decade-old private payment processing firm with 60,000 merchants on its platform and over $17 billion in credit card transactions processed to date. The acquisition was based on a valuation of $350 million in cash ($180mil) and stock ($170mil).

FNTEU was listed in Jan 2017 again to acquire a financial technology business. In mid-2018 it merged with Intermex Holdings, a payments fintech focused on Latin America and the Caribbean (NASDAQ:IMXI), 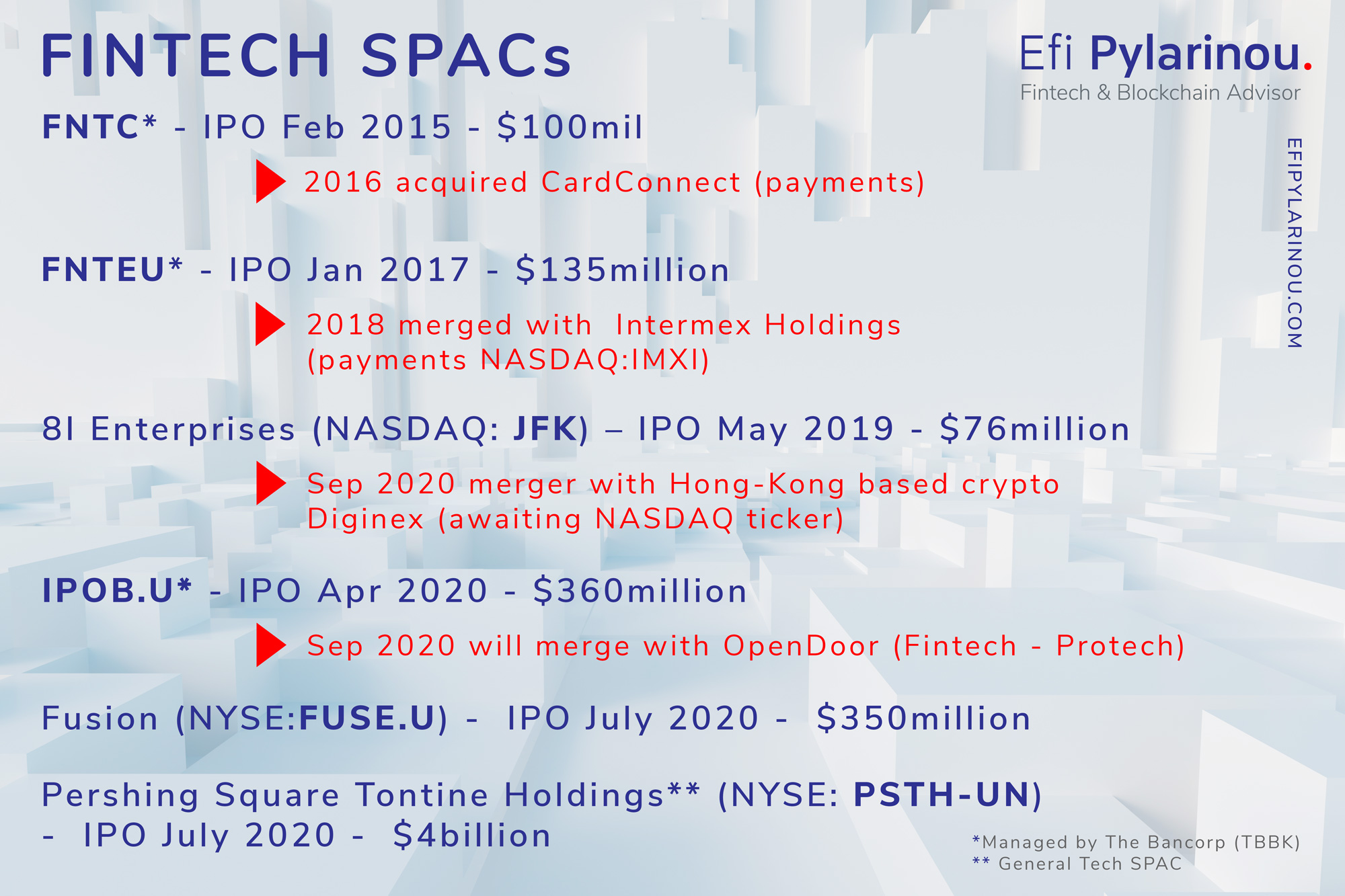