We are living in a world in which, more or less unconsciously, we increasingly “Trust in Math”. After the GPU adoption in business, we moved to new hardware that is not only faster but also smaller in size. We basically reinvented how data rooms looked.

And this the world from Nvidia’s angle. They have facilitated the growth and new value creation, all powered by Artificial intelligence tools.  The use cases in Finance are immense. Fintech solutions for:

Marc Stampfli, the Swiss country manager at Nvidia shared the journey of the Artificial Intelligence Fall, Winter and into Spring, during his talk at the Fintech+ conference last year in Zurich. He explained neural network concepts borrowed from biology and the initial difficulties of neural network computations outperforming statistical approaches. The first tipping point came with increased data availability through the internet, and only then we had evidence that neural networks could outperform statistical models. 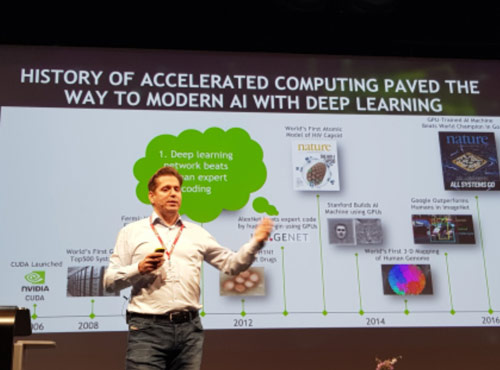 After that point, we ran into the next problem which was the lack of computing power to process all this data and multi-layer neural networks. And this is where GPU – a kind of parallel computer – was created and first used in vector mathematics. This is the technology of Nvidia’s processor.

The next inflection point came with the use of GPU to accelerate the next generation of machine learning algorithms. This led to an explosion of AI research, development and application, all powered by NVIDIA.

Today, NVIDIA is turning into a data center company. This positioning has become evident with NVIDIA’s announcement to buy the data center networking company Mellanox for $6.9B. This is the first large size acquisition for NVIDIA and one that is in alignment with their belief that Datacenter will play an ever-increasing changing strategic role whose architecture will need to be agile and scalable.

2020 is only a year away. In March NVIDIA`s GPU Technology Conference (GTC) is the place to hear use cases and innovative approaches to AI from some of the world’s largest financial institutions at GTC.

I have no positions or commercial relationships with the companies or people mentioned. I am not receiving compensation for this post.

Leave a Reply Cancel Reply
You might also like
One of the following
Are Decentralized Exchanges part of the Bottom-up decentralized monetary policy?
Who is redesigning financial services?

No Trade-offs: Give customers everything they want as cheaply as possible